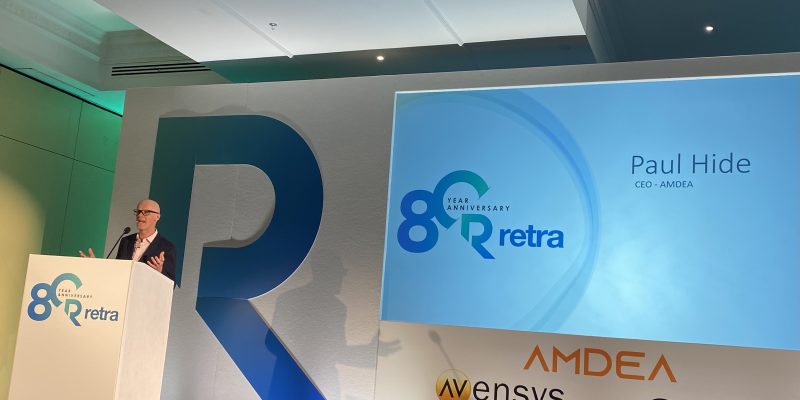 Sustainability and the road to net zero were key themes of this year’s Retra Conference, which was sponsored by AMDEA.

“Appliances have a critical role to play in future sustainability – in helping achieve the net zero home. In fact, it cannot be achieved without reduced appliance efficiency which, on average, accounts for circa 15% of a home’s overall energy consumption,” he said.

“Continual improvements in appliance efficiencies, reducing energy and water consumption, will play a key role in driving down the overall household carbon footprint and environmental impact.”

Mr Hide told delegates that over the past decade, householders have embraced improving energy efficiency. He said: “We are all using more efficient appliances and insulating our homes to a greater degree, reducing costs and emissions.

“New homes are being built to far higher energy efficiency standards than before. Smart electricity meters are in operation in over 16 million homes and around half of UK households have a water meter. Appliance efficiency has increased greatly over the last decade and has played a positive role in helping keep overall household running costs and CO2 emissions down. “

He explained how 80% of washing machines sold reached, under the old labelling scheme, A++ or A+++ efficiency levels.

“As many as 90% of fridges and freezers sold were A+ or A++ and today’s most commonly purchased fridge-freezers use 40% less energy than those in use in homes just a decade ago,” said Mr Hide.

Mr Hide outlined how constant improvements in energy and water efficiency drove the rescaling of the energy labelling scheme, which was implemented in March last year, to better help purchasers identify the best-in-class appliances and spread the range of products on offer over the full A to G scale.

Looking to the future, he said: “Appliance design and the implementation of new technologies will continue to reduce energy and water consumption, that is not in doubt.

“However, the amount of energy that modern appliances now use is, on an individual level, relatively low and therefore the positioning of savings in electricity and water bills need to considered not on a single cycle basis, where the savings will be pennies, but over time, where the savings will start to mount up to meaningful numbers.”

He told retailers that selling the efficiency benefits to their customers was as much about educating householders to purchase appliances that best serve their needs (i.e., not larger than required) and using appliances on their most efficient settings.