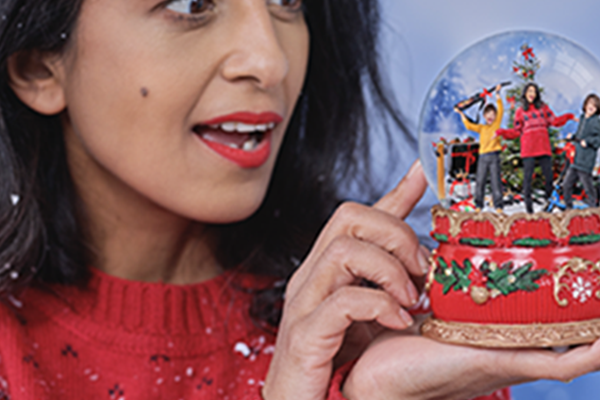 TV presenter Konnie Huq and her family have teamed up with home-organising guru, Nicola Lewis, to launch a new consumer campaign on behalf of Recycle Your Electricals.

The ‘Give-Back January’ initiative is aimed at getting members of the public to recycle or donate their old electrical appliances.

As part of the creatives for the social media campaign, Konnie and Nicola step inside a life-size snow globe, where they find a snow-capped winter wonderland, a beautifully decorated tree and presents for loved ones. However, on closer inspection, they realise that every gift and ornament is an old, unwanted electrical item which could be recycled, resold or donated.

The gifts in the snow globe represent the millions of electrical items consumers buy – and throw away – every year. It is estimated that 35 million people throw their Christmas lights away – enough to wrap around the Earth nearly 12 times.

“Millions of us will be giving or unwrapping new tech this festive season – even though we also hoard more than two million items as a result of Christmas spending,” said a spokesman for Recycle Your Electricals.

“So now’s the time to get sorting and bagging those old gadgets, wires and gizmos we know longer need, ready to pass on or donate in the new year. Don’t forget, any broken electricals can be recycled.”

Added Konnie Huq: “My family and I love Christmas – and often buy each other electrical gifts. But we’ll also be hunting out all our unwanted pieces and boxing them up to be donated in the new year. We want everyone to join in!”

Click here to see where you can donate or recycle your old electricals.