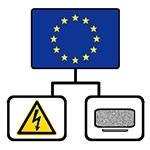 For the LVD, the European Commission has published a guidance document and listed the Harmonised Standards which can be used to demonstrate compliance, but with three omissions compared with the previous listing. As previously reported, the UK and German Governments had objected under the previous LVD that the standards for refrigeration, small ovens, and blenders were insufficient to prove that the products were safe. There has been some suggestion that the Commission’s refusal to re-list these standards was not in accordance with the proper process, as the safety requirements have not actually changed. However, the fact remains that until these standards are listed, manufacturers have no presumption of conformity, to demonstrate that their products meet the requirements of the legislation.